Diffuse knapweed grows from long taproots into a bush up to two feet tall with a single upright stem sprouting many branches. The stems have fine, short hairs, giving the plant a gray appearance. The leaves are small, alternately arranged, and finely divided. White or pale lavender flowers at the tips of the branches resemble bachelor buttons.

Diffuse knapweed reproduces entirely by seeds. A single plant can produce up to 18,000 wind-dispersed seeds. These seeds are tightly held in the flower head, but are dislodged and dispersed over large distances when the plant stem breaks off later in the season and the plant becomes a tumbleweed.

Diffuse knapweed is an excellent source of nectar for bees and other insects in mid to late summer when other sources are scarce. However, this virtue is far outweighed by the plant’s ecological damage. Diffuse knapweed, like other knapweeds, is thought to release allelochemicals into the ground around it, preventing the growth of other plants. Its invasive behavior is enhanced by its tolerance for a wide range of soil conditions and climate, and its success in disturbed areas.

Small amounts of diffuse knapweed can be pulled by hand before the seed is set in summer. The sap may irritate the skin so wearing gloves is recommended. 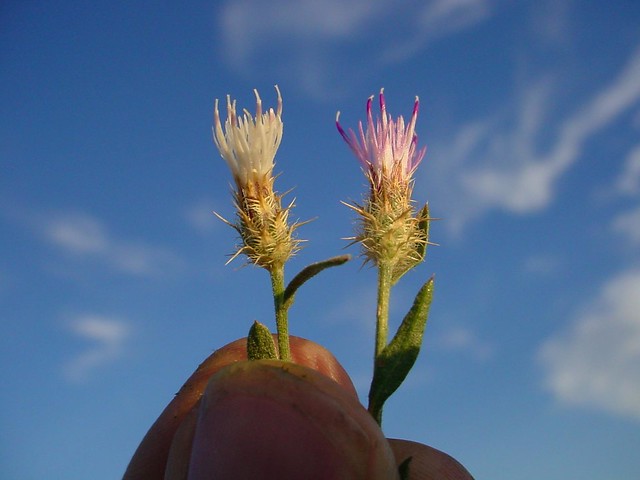