The name “white-leaf” refers to the silky-white hairiness of the leaves of this phacelia. Dense short hairs lend the plants an overall grayish-green color. The plant grows up to twenty inches tall. Roughly the upper half of the plant consists of branched flowering coiled clusters. Flowers are crowded in small clusters on one side of the stalk that are coiled into twisted "S" shapes. Each cluster has many small white or purple flowers. The numerous dark stamens are conspicuous because they protrude far beyond the flower petals and give the appearance of bristles. Each flower produces a tiny capsule with one or two seeds. This plant prefers sandy soil.

Phacelia have been called scorpionweed because the curling flowerhead resembles a scorpion’s tail.

A drink boiled from phacelia was consumed by Native Americans for difficult menstruation. 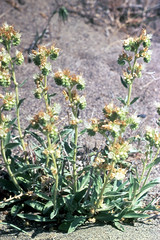