Western serviceberry derives its common name not from “serving” but from Sorbus, the Latin name for mountain-ash, because its leaves look much like mountain-ash. It is a large, variable-sized, common shrub in the Sage Hills. In spring, it bears many attractive and fragrant white flowers.

Serviceberry stems and leaves are valuable as a browse for wildlife, particularly deer. The berries turn bluish-purple when ripe, and are juicy and tasty but pithy. The berries are one of the earliest fruits to ripen, and provide a staple food source for birds and coyotes.

Western serviceberry was also a valuable source of food and tools for Native Americans. Its hard, straight wood was used for arrows, root-digging sticks, and seed-beaters. The berries were dried alone or squeezed into cakes and dried. The berries were also used as a sweetener for other foods. In winter, serviceberries were boiled to make a pudding or added to a stew. Hunters made a snack of a mixture of dried salmon and serviceberries. 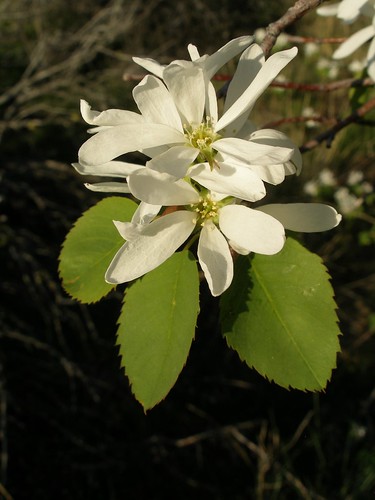