Shooting star has flowers at the top of leafless stems two to sixteen inches tall. The leaves are smooth and oblong, one to six inches long, and grow from the base. The unusual shaped flower is easily identified by the five pink petals pulled back from five colorful stamens, nodding toward earth like a “shooting star”. It has also been described as a jet-propelled missile with its “nose-cone” being the showy yellow stamens and pistil. Some say it looks like the flowers are inside out.

Such an unusual flower requires a special technique for pollination. While hanging upside down, a bumblebee grasps the yellow band at the base of the petals. It then gives a quick buzz of its wings which shakes pollen out of the flower’s anthers and onto its abdomen. When the bee visits the next shooting star, the thin stigma protruding from the tube is perfectly placed to receive the pollen.

Shooting star was used medicinally by the Native Americans as a wash for sore eyes or for cankers. It was also used by women as a love charm and to help them control men. 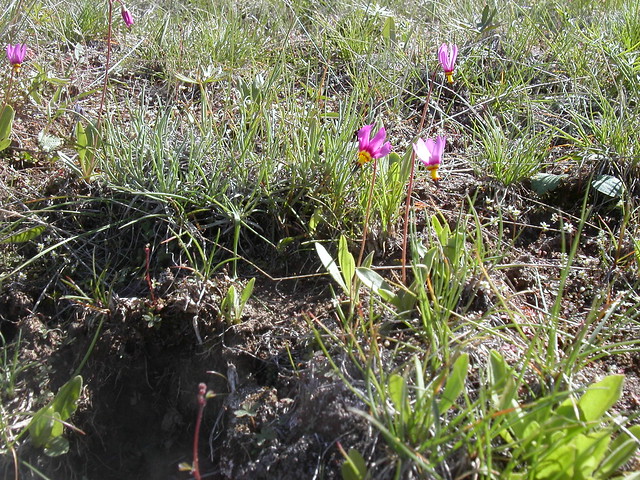