Showy and widespread throughout the , the sagebrush buttercup is one of spring’s first arrivals, often blooming in February. Frequently growing beneath large shrubs such as sagebrush or bitterbrush, the bright-yellow, shiny petals of the flowers contrast sharply with the dark-green, fleshy-lobed leaves. The attractive flowers usually exceed one inch in diameter with five (occasionally four, six, or seven) very bright, waxy-shiny, yellow petals. There are usually several stems that grow erect up to six inches tall, with the leaves springing from the base.

Buttercups contain a potent skin irritant, called protoanemonin, that causes redness and blistering of the skin and mucous membranes. Native Americans often used it on their arrowheads as a poison. The whole plant was used to poison coyotes. A poultice of mashed and dampened whole plants was used to alleviate pains of any kind. A poultice of mashed leaves was also used for warts. 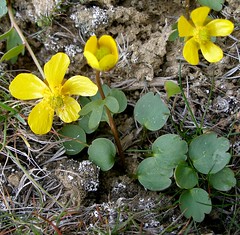