Barestem biscuitroot has a long slender main stem (up to three feet tall) that ascends up to a hub where smaller stems branch out like the spokes of an umbrella. At the end of each spoke is a dense ball-shaped cluster of small yellow flowers. The broad, oval-shaped leaflets are distinctive for a lomatium: smooth and thick, one to three inches long, one-half to two-and-a-half inches wide, and often clustered in groups of three. The flattened fruits have thin “winged” edges responsible for the generic name, lomatium.

Barestem biscuitroot provided abundant food for the Native Americans as wild celery or Indian celery. The raw shoots tasted crisp and peppery and were high in Vitamin C. The stems and leaves were cooked in stews for flavoring, or boiled and eaten with fish. When the greens were too bitter to be eaten as celery, they became a source of medicine. The dried seeds and leaves were used in a hot tea to fight a cold, reduce a fever, or cure colic. The seeds smell like licorice and were used as mothballs to protect ceremonial clothing from insects. 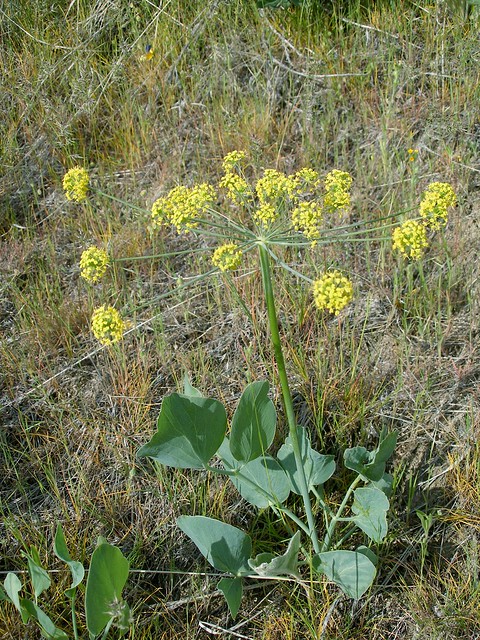